Electrical contractor Clarkson Evans has been named Apprentice Employer of the Year at the first ever AAC Awards.

The company was up against heavyweight organisations such as BT, Capgemini and Sheffield City Council for the coveted award, which was one of a number presented at a glittering awards ceremony at the ICC in Birmingham last night (22 March).

The awards were organised by FE Week and the Association of Employment and Learning Providers as part of the Annual Apprenticeship Conference. 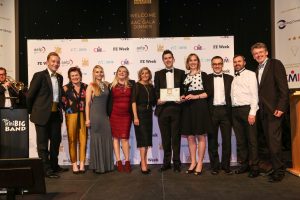 Chief Operating Officer Lindsey Young accepted the award on behalf of the company.

Lindsey said: “The award recognised our outstanding commitment to apprentices and apprenticeships and, like other awards we have won in the past, reinforces our reputation as one of the leading employers in the electrical and construction industries.”

In total, Clarkson Evans employs more than 150 apprentices and operates across much of southern England, the Midlands and south Wales.

The company has had an impressive 12 months in terms of award wins, being recently named a Top 100 Apprenticeship Employer at the National Apprenticeship Awards and receiving the coveted Princess Royal Training Award late last year.

Unlike many other apprentice employers, Clarkson Evans recruits all year round and currently has electrical apprenticeship vacancies in Oxford, Crawley and Bracknell. To apply visit www.clarksonevans.co.uk