Richard Britten: From Apprentice to Main Board Director

An apprenticeship offers young people a fantastic chance to build a career where the limits are only as high as they choose. To illustrate this, we have chosen to share the story of Richard Britten, who has risen from apprentice to Main Board Director, all whilst working here at Bagnalls. 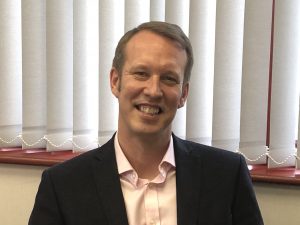 Richard Britten first began working for Bagnalls after he left school in 1992. Richard was unsure about his future and had taken a job that came along, but didn’t reward him. He was approached by Bagnalls during this role, and took the chance on our apprenticeship programme. For four years, Richard was trained to become a craftsman painter and decorator. He then worked for the business for another three years before being given the opportunity to develop as a surveyor.  Then Richard was promoted to manager at our Doncaster branch, following on from that he formed a new business from scratch, located in Leicester.

In 2012, Stephen Bagnall Bagnall, Group Managing Director, rewarded Richard’s commitment to the company by promoting him to Regional Director, with the additional responsibility of our Wolverhampton branch.

Remembering his experience, Richard was appreciative of his apprenticeship years: “My apprenticeship at Bagnalls was fantastic. It came at a time when I wasn’t sure which direction to take in life. Bagnalls took me under their wing, working with me on all levels to help develop my skills. I met John Bagnall, who was Managing Director at that time, which meant a lot to me. The apprenticeship was not a box-ticking exercise and people gave me their time, so I have tried to bring young people into the business to repay the opportunity given to me.” 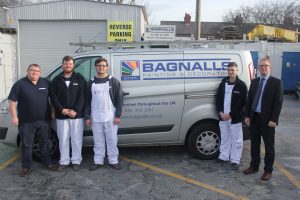 Commenting on new apprentices, Richard was keen to stress the importance of being valued: “Certainly if you’ve not done amazingly at school or you’re unsure if you want to pursue an academic route, it can be hard to know what to do with your life. When a company like Bagnalls gives you time and attention it makes a difference. We need young people to come through to create new craftspeople for the future – so we invest heavily in our apprentices and it shows. We offer our own academy, opportunities for progression and plenty of support.”

“An apprenticeship at Bagnalls isn’t just learning how to paint – it’s about learning the craft and being given the chance to progress. There’s a lot of promise. Someone gave me an opportunity and I ran with it – I’m proof you can have a great career. With an apprenticeship in painting and decorating, you can make a life for yourself and learn a huge variety of skills you’ll keep forever.”

The culmination of Richard’s progression in the company has been recognised this week, when he was appointed to the Main Board, just over 25 years since he started his career with Bagnalls.

“It’s a great honour to be appointed to the main board and I am so proud to be in this privileged position.  I am glad that I made the right decision all those years ago by joining the Bagnalls Apprenticeship programme.”