During an evening of celebrating at Wembley stadium, the achievements of family businesses were acknowledged, at the National Family Business awards. The leading lights of British and Irish family businesses came together to bask in the success and importance that family businesses bring to the economy and people’s lives.

Bagnalls were named Regional Winner: North East & Yorkshire for Apprentice Champion and also Regional Winner: North East & Yorkshire for Big Heart. Both very prestigious accolades that reflect the company’s positive commitment to developing apprentices and giving back to the community. A panel of twenty-four judges worked through hundreds of entries and two months of interviews until they made their final decisions. 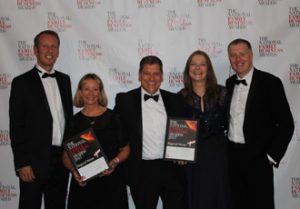 A spokesperson for the judging panel, for the Apprentice Champion award, said “It was evident that Bagnalls has been a long-standing supporter of apprenticeships and that developing young people is an important part of the company’s core values. We could see that the commitment to apprentices was driven by top level management, who believe in the benefits of a strong apprenticeship intake every year. Not only do Bagnalls give young people a headstart on the job ladder but many remain with the company for their whole career, progressing to foreman, supervisor, management and Director level positions. They truly deserve to be called Apprentice Champions!”

Apprenticeships are just one way that the company gives back to the community, they also have a commitment to charitable support through the Bagnalls’ Community Paintbrush Scheme. This was also recognised on the evening when Bagnalls were named Regional North East and Yorkshire winner: Big Heart. Joanne Gualda, Group Marketing Director, said “This award acknowledges all the hard work and commitment given by my colleagues to local community projects and charities. In the past five years since our Community Paintbrush scheme was launched we have helped over sixty organisations, ranging from painting a children’s hospice in Liverpool to donating paint bound for a school in Malawi. Winning the regional Big Heart award is very special and we would like to thank all those who supported our nomination.”

The evening, organised by Family Business Place, was attended by over three hundred and fifty family businesses, demonstrating the importance that this sector delivers to the UK and Irish economy.

Bagnalls is a national painting, decorating and specialist coatings contractor, with 13 branch locations in the UK. Established in 1875 the company remains family owned and managed.

Visit us on the web at www.bagnalls.co.uk