Bagnalls painting and decorating apprentice from Bradford has been heralded the best in the country at a national industry awards ceremony.

Lewis Boyle, 19, was crowned Apprentice/Trainee of the Year at the 31st Premier Trophy Awards, organised by national trade body the Painting and Decorating Association (PDA). 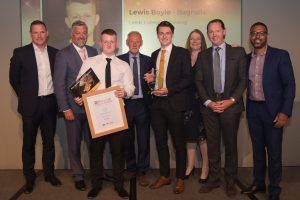 Held at Plaisterers’ Hall, London, the glittering annual event celebrates the excellence of the painting and decorating industry, showcasing the workmanship of members and recognising the rising stars in the sector.

Lewis just pipped fellow student Abi Johnson to the post, both are studying towards their NVQ Level 3 qualifications at the Leeds College of Building.  Lewis had to battle it out against 26 other apprentices from across the UK earlier this year in the PDA’s gruelling six-hour competition, sponsored by CITB, Purdy and Dulux Trade.

Neil Ogilvie, Chief Executive of the PDA, said: “This is a great result for Bradford and both students are a credit to Leeds College of Building.

“The competition is not an easy one, but both students demonstrated exceptional skills and their work was faultless.

“On behalf of the PDA I would like to congratulate Lewis and Abi, as well as all of the other competitors, for their incredible sportsmanship and I wish them all the best for their future careers.”

Coming out on top, Lewis was invited up on stage and presented with a trophy and certificate, as well as a £500 voucher from Purdy and Dulux Trade gifts.

Lewis – who has been employed by Bagnalls, based in Shipley, for the last two years – said: “I entered because I thought it would be a great achievement if I won.

“I’m over the moon that I did and it’s something I will take with me forever.”

Stephen Bagnall, Managing Director of Bagnalls’ Group, was at the event to see Lewis presented with his award.  He said: “Lewis has continued to show promise throughout his apprenticeship, with his win at last year’s PDA Paperhanging competition and now being named winner of the PDA Apprentice Awards, 2019.

“The expectations and timescales of these apprentice competitions are very testing and Lewis has obviously demonstrated a high level of skill across the board.

“I must also acknowledge the excellent support Lewis and other apprentices receive from the tutors at Leeds College of Building and of course our own Craft Tutor, Barry Caple, at the Bagnalls’ Academy.

“I am delighted that Lewis has won this noteworthy award, his individual apprentice win follows the success of Bagnalls at the 2018 Yorkshire Post – Excellence in Business: Apprenticeship category win, strengthening the company’s commitment and dedication to its National Apprenticeship Programme.”

Bradford Council employee, Abi Johnson, was presented with a £200 Purdy Voucher and a Dulux Trade bundle.  She said: “Having won the competition last year it would have been great to win again, but Lewis is a really good friend and I am delighted that he came first.”

Megan Talbot, a student at Accrington and Rossendale College and an employee of Oliver Gladwin, finished in third place.