Best of Luck to Bagnalls’ Decorators

Two apprentice decorators based out of Bagnalls’ office in Bradford will take their places among the best young talent in the painting trade as they compete to be named ‘Apprentice Decorator of the Year 2019’, sponsored by Crown Paints. 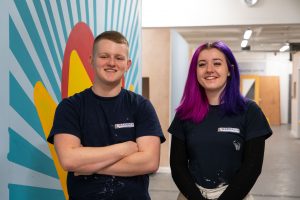 Lewis Metcalfe, 19, has worked for Bagnalls since 2016, and Abi Johnson, 21, recently joined the company. The pair have competed against each other for the past few years in various competitions and were duly named first and second place winners at this year’s Painting & Decorating Association Apprentice Awards.

Ten young decorators have been chosen to represent the trade following rigorous regional heats held across the UK. They will be putting their painting skills to the test at this year’s Apprentice Decorator of the Year (ADY) Final, hosted at Birmingham’s NEC as part of World Skills UK LIVE. The judges will be looking for a range of competencies including attention to detail, accuracy, time management and flair as well as the ability to maintain a tidy work station, and with only 18 hours to complete the complex task their skillset will be tested to the full.

Crown Paints’ competition manager Kevin O’Donnell said: “Reaching the Apprentice Decorator of the Year final is a huge achievement, and all our competitors should be very proud of themselves. Abi and Lewis both performed very well in the regional heat, so I’m looking forward to seeing their work at the final too. I’m sure they’ll be a great credit to their tutors at Leeds College of Building and their employer, Bagnalls.”

Both Abi and Lewis were supported throughout their apprenticeship by Leeds College of Building. Bagnalls has strong links with local colleges to ensure that the training is aligned with the company’s formal apprenticeship programme and additional training at Bagnalls academy in Doncaster.

Naomi Colecchia, HR Manager added “We want to wish Abi and Lewis all the best for this week’s competition and to let them know that we will be rooting for them.”