It was win, win, win for Dale Power Solutions at the regional heats of the National Apprenticeship Awards on 10th October. Not only did Dale take the award for Large Employer but apprentices Hannah Magowan won Advanced Apprentice category and Mickyle Clark was awarded Higher/Degree Apprentice. Having now won at regional level all three will be entered into the nationwide competition to compete with the country’s elite. Finalists will be announced in November and the winners in January 2018. 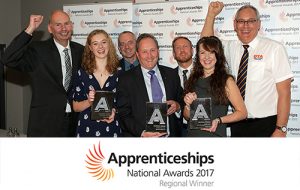 “Winners recognised at these awards show the range of sectors and variety of job roles apprenticeships are available in, and how they can deliver the skills employers need. I congratulate all winners on their success so far and the very best of luck in the next stage of the competition.”

The Awards, now in their fourteenth year, are run by the National Apprenticeship Service and recognise excellence in two areas: businesses that grow their own talent with apprentices and apprentices who have made a significant contribution to their workplaces.

On being announced as Large Employer winner, Mark Carter Business Support Manager at Dale Power Solutions said: “Being a company with under 300 employees makes us relatively small for the Large Employer category which is open to organisations with up to 4,999 employees, so we were thrilled to win this award in the Yorkshire and Humber region. One third of our apprentices are female and having two of our apprentices, Mickyle Clark and Hannah Magowan awarded with Higher/Degree Apprentice and Advanced Apprentice in the regional finals is the icing on the cake. Hannah has been with us for two years and Mickyle just over three years. Both women are real assets to the business and the recognition is well deserved.”

Dale chief executive officer Tim Wilkins added: “As a recognised Cornerstone Employer our grass-roots strategy to solve a skills shortage in the industry is in its tenth year and we are proud to have apprentices at all levels working within the business. Our Ambassador programme is thriving and our apprentices will continue to work with schools and colleges to combat the wider issue of social mobility in our area.”

Dale Power Solutions is no stranger to the NAS Awards having won Highly Commended Employer in 2012, Regional Apprentice (Natasha Pitts) in 2013, 2014, 2016 and Regional Medium Employer in 2014.

Dale Power Solutions provides critical power to organisations where power outages is not acceptable, for example hospitals, airports, oil platforms, data centres. The head office is based in Scarborough, North Yorkshire with satellite offices in Hemel Hempstead and Dubai.

Dale Power Solutions employs over 270 people and has a turnover of £32m.

The National Apprenticeship Service supports the delivery of apprenticeships in England. It offers free impartial advice and support to employers looking to recruit for the first time or expand their apprenticeship workforce. This includes simplifying the process of recruiting an apprentice through the support of employer focused teams and Find an apprenticeship recruitment sites on GOV.UK where employers can advertise their vacancies and potential apprentices or trainees can apply. Call 08000 150 600 or search for apprenticeships on www.gov.uk to find out more.