Lee started his apprenticeship with VGC in 2013; by 2015 he was an engineer’s assistant.

When MP Nick Hurd visited VGC’s head office in November 2014, Lee was among the apprentices invited to meet him. Nick said: “The VGC Group’s apprentice scheme offers valuable opportunities to get training and career direction in a very exciting industry. I really enjoyed chatting to the apprentices and hearing their stories. They are remarkable young people and I am delighted they are doing so well, and I wish them all the best in their future careers.” 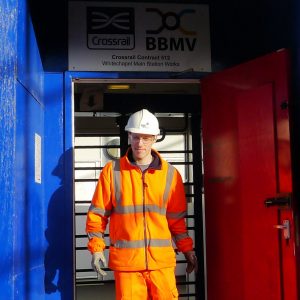 Lee did his apprenticeship for VGC Group on the Whitechapel Crossrail project (for Balfour Beatty Morgan Vinci JV).

“Doing an apprenticeship has been a good alternative to going to university and getting into debt”, he said. “If you’re just studying it can be hard to get by, but in an apprenticeship you’re earning money from the start and there are good opportunities at the end of it.”

Lee attended college at the Stratford Building Crafts College one day a month to enable him to gain the NVQ Level 2 in Underpinning Railway Engineering Knowledge. In November 2014 he was awarded the Morgan Sindall prize for the best-performing second year student for construction operations by the Building Crafts College.
He started his apprenticeship as a general labourer learning various skills including concreting, health and safety, carpentry and bricklaying. “I enjoyed doing it all – they were all challenging and fun in their own ways.” He chose the role of chain person assisting a surveying engineer, because it was the one he liked most.

“We monitor the whole site to ensure it stays safe, and that the ground isn’t moving. We take readings to monitor for minute changes in the ground level using an inclinometer – a probe which we use to check the levels at half meter intervals right down to 50m or 75m underground. We have numerous levelling points near buildings to ensure that they aren’t put at risk by our activities.

“I work with a really nice surveying team – they teach me things and help me to learn. Everyone in construction cares and helps you out – everyone wants to see you progress, which is really nice.”

He praises the support VGC has given him. “I feel that VGC has been there for me more than they need to. If I’ve needed support in work or at college they’ve been there and helped me out. They care about their people.”

Lee’s work experience and qualifications mean he can progress his career wherever he wants to go. “I’m open to whatever develops: I just want to learn more and be better at it.”