Apprentice George Russell’s name will be in lights for years to come having become the first ever electrician to pass the new electrotechnical trailblazer apprenticeship standard.

Twenty-two-year-old George said he was nervous before the gruelling three-day practical assessment, especially when he realised that his assessor was also being assessed as it was the first time anyone had sat the new style end-point assessment.

But a committed period of revision and support from the team at Clarkson Evans Training, meant George was fully prepared for the assessment, passing with flying colours, and first time to boot!

The new electrotechnical apprenticeship standard was introduced in response to the Richard Review of Apprenticeships, which recommended improvements should be made to the assessment of all apprenticeships to make them more robust and to better meet the needs of industry. 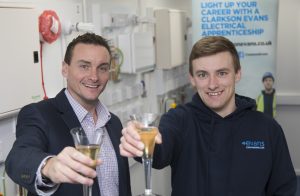 Simon Kingwell, Production Director at Clarkson Evans said: “We are delighted that one of our  apprentices is the first to qualify as an electrician under the new electrotechnical apprenticeship standard.

“George is a hardworking member of staff who, since qualifying, has already been trusted to mentor an apprentice and lead his own team. We’re confident he’ll have a bright future in the electrical industry,” added Mr Kingwell.

George said: “I’m not a very confident person and so I’m pleased that I didn’t let my nerves get the better of me during the assessment, especially as there were so many people in the room watching what I was doing. I’m thrilled to have qualified and I’m looking forward to further developing my skills at Clarkson Evans.”

Carolyn Mason, Chief Executive of National Electrotechnical Training, the charity that administers the end-point assessment for all qualifying electricians said: “We were delighted to witness George pass the new-style assessment and also complete the new apprenticeship standard in the process. These are two important ‘firsts’ for the industry and we look forward to rolling out the new assessment even further in 2018.”

George is one of 116 apprentices at Clarkson Evans to have qualified as electricians in 2017.