Richard Bridgman, skills champion and founder of Thetford engineering business Warren Services,member of The 5% Club, has been awarded an OBE for services to training young people in the 2018 Queen’s Birthday Honours list. The 70-year-old businessman, originally from Surrey, is well-known in the East Anglian business community and nationally for his tireless work promoting apprenticeships, improving work experience and job opportunities often for the long-term unemployed.

The energetic entrepreneur is an active member of the New Anglia LEP Skills Board, the Norfolk County Council Skills Group, EEF Regional Board in East Anglia, is a government Apprentice Ambassador, STEM Ambassador and enterprise advisor to Thetford Academy. He was East of England chairman at SEMTA, the sector skills council for manufacturing, until 2010. Bridgman is well-known for his direct, no-nonsense style of communication to cut through to the important issues in delivering training provision. 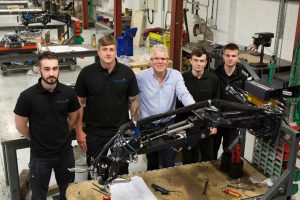 In an engineering career spanning five decades, Bridgman has sought to help young people reach their potential. After completing a toolmaking apprenticeship in Kingston he worked for a local engineering company for 22-years, then in 1990 with wife Sharon he founded Warren Services in Feltwell, Norfolk. The business relocated to the Fisons Estate in Thetford in 2005 where it opened a second factory in 2014. Bridgman has helped train many apprentices at the company over the last 28-years, many of whom still work here.

Bury St Edmunds resident Bridgman believes the value of work experience to young people and business is seriously overlooked. He said: “I believe I have worked hard outside my company to champion high quality training for young people. To be recognised for this with an OBE is just fantastic and a very great honour.”

For the past eight years he has worked closely with the DWP in Norfolk and Suffolk to identify novel ways of providing the unemployed with jobs. “I work very closely with DWP on giving work experience and job opportunities to NEETs [people Not in Employment, Education or Training], and many have been given a job or that vital experience to making them job ready,” he said.

Driven by the paucity of local training providers, Bridgman previously tried to establish an independent training school at Warren Services, but the plan was derailed by government funding changes and red tape. He has supported West Suffolk College, which he rates very highly, on standards and courses and is currently helping the college with its bid to be one of 10 Institutes of Technology in the UK.

Harry Haskew, a higher level apprentice at Warren Services, said “Being an apprentice for Warren Services has given me the opportunity to learn and progress new skills in a varied engineering environment. Richard is always keen to hear about how I’m getting on and it’s clear that he is very passionate about apprenticeships.”

In January 2012, Bridgman was invited to No.10 Downing Street to advise on Health and Safety at Work legislation at a national level and while at SEMTA he co-chaired a House of Lords event to give SMEs a stronger voice on health and safety. He is a former nominee of the “Top 100” in The Manufacturer magazine’s annual awards to reveal inspiring people in the manufacturing sector.

Bridgman said: “Many people have helped me throughout my business life and without their support and understanding I don’t think this award would have been possible. One of my personal dreams was to take my wife to a garden party at Buckingham Palace, so this award tops that.”